Another Great Tool Worth A Second Look-Google Squared

I know, I know. There are already so many tools, apps and resources you want to use in your classroom, with your kids, or for your professional development, that you just don't have time for one more. Hold that thought and read about Google Squared and you might change your mind.

I wrote about Google Squared back in June when it was released by Google Labs. In a nutshell, Google Squared aims to make researching a general topic easier by providing more relevant search results.

Take for example the topic of "Planets." If you were going to do a boring ol' Google Search, you might type in the name of one planet at a time. You might even get a list of planets and their attributes. Google Squared does all this for you! You enter "Planets" and you are presented with a customizable list of attributes for all 9 planets (and others) including orbital period, diameter, mass, etc. You also get a picture and a description. All information is presented in a nice looking grid. Need another attribute that isn't listed? Add a column and Google Squared will search the information for you.

There are some new features in Google Squared that make it even better. One is the suggestion of attributes. Recently I was doing a Square for "Elements of the Periodic Table." While the attributes the Square returned were helpful (Symbol, Atomic Number, Mass) I need the Boiling Point and Melting Point. Scroll to the right, add the attribute "Boiling Point" and the information was immediately populated in my square. Some of the values were in Kelvin. I wanted a different value. Here is another new feature, I was able to click the attribute and search for another value, Celsius, right from the square. I could see where the information was coming from and what the new information was going to be.

Here is a snapshot of the suggested Attributes for "Elements of the Periodic Table:" 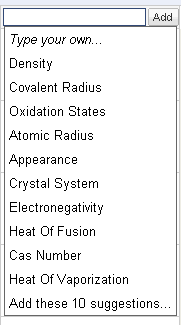 And here is a snapshot Square I created for the Elements.

Another great new feature is the ability to export your Square to a Google Spreadsheet or as a .CSV file so that you can compare data. For example, using my Elements Square, I could compare the Atomic Number to the mass and create a cool scatter plot graph to look at the correlation.

Google Squared isn't perfect. I was doing a search on States and tried to add the attribute "Unemployment Rate" and it could not fill that information in for me. I could go out and search for that information and add it myself however. I don't like I can't change the size of the columns in the Square but I can when I export the data. There are some kinks but not enough to not use it.

So go over and check it out. Enter some terms. Just play. Think about how you could use it for research in your classroom. Then head back here and share your ideas!

Google Squared
Unknown at 11:11 AM