Rebuild The World With @Lego_Education 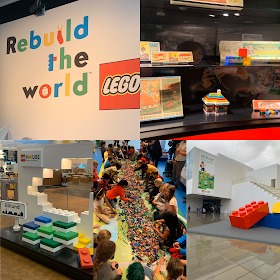 I recently returned from a trip to Billund, Denmark. To many, a trip to Denmark is one of a lifetime. For me it was especially so as Billund is the home of LEGO. From the time I was a kid I have been surrounded by legos. I could spend hours upon hours building my own utopian town, a scene from the old west, a spaceship or something else entirely. Even in my adult life I am still surrounded by these magical bricks. Both my daughters have every LEGO Friends set imaginable and I enjoy building the Star Wars sets and LEGO Architecture sets.

During my time visiting LEGO House (their new headquarters/museum/shire to all things LEGO, the LEGO Idea House and a LEGO Factory I learned things I didn't know about the company.

Here are 5 things you might not know:
And it's that last fact I personally find amazing. As a former Middle School Science teacher I was familiar with Mindstorms. And back in 2018 I was able to attend the First LEGO League World Championships where I could see creativity with LEGO first hand and how kids from around the world used them to solve authentic problems.

However, it wasn't until I went to Billund to see first hand all that LEGO Education has to offer that I realized it's much more than robots and bricks. There is so much potential for our youngest learners all the way to our oldest to truly Rebuild The World with LEGO.

Here are the four sets and where you can learn more about them.

LEGO WeDo 2.0
-Core Set-280 LEGO elements, WeDo 2.0 Smarthub, WeDo 2.0 Motor, WeDo 2.0 Motion and Tilt Sensor
-Unit Plans-Science and Engineering, Computational Thinking, Maker
LEGO Education WeDo 2.0 combines the intuitive LEGO brick system, classroom-friendly software, block-based coding, and standards-aligned lessons that you can easily integrate into your existing curricula. Designed with collaboration in mind, each core set supports two students, introducing them to science, computational thinking, and engineering principles in a fun and engaging way. Teachers are set up for success from the beginning with training, getting-started activities, a teacher guide, and easy-to-follow lessons. Evaluation is made easy with a documentation tool and an assessment rubric offered within the software

LEGO MINDSTORMS EV3
-Core Set-Education EV3 Core Set, Visual Studio Code with EV3 Micropython Extension
-Unit Plans-EV3 Computer-Integrated Manufacturing, EV3 Real-World Vehicles
LEGO MINDSTORMS Education EV3 is a hands-on, cross-curricular solution that engages students and challenges them to practice STEM and robotics skills in a “near real-world” environment. It fosters the project-based learning that high school students thrive on. And it allows for in-depth study with the autonomy to define and reach individual goals, which is so important at this stage of education. The EV3 lessons are designed to prepare students for college and their future careers in our technology-infused world. Throughout the EV3 lessons, students design sophisticated and diverse robotics inventions for real-world prototyping using the advanced features and functionality of EV3 along with the text-based Python programming language. Programming with EV3 broadens high school students’ exposure to computer science, giving them more practical experience upon which to build job-specific skills in computer science, engineering, and areas of career and technical education(CTE), such as manufacturing, information technology, and pre-engineering.

Definitely check out these set and all that LEGO Education has to offer. Give kids the opportunity to Rebuild The World with LEGO!