What 15,000 Kids Taught Me About Creativity 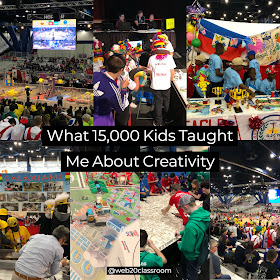 When I walked into the Houston Convention Center a few weeks ago I wasn’t sure what to expect. I had never attended a FIRST LEGO League World Championship. Walking through the doors I was in awe. 15,000 kids from nations all over the world gathered to show off their robotic and LEGO creations and compete for the title of World Champion. I heard multiple languages, adults reminding kids about how they got there and some of the craziest chants you’ve ever heard.

I thought was here to watch kids problem solve with robotics, not go to war.

But it was war. A war of creativity.

There is a lot to learn about FIRST, the organization behind the meets, what they do and how they do it. Essentially they help promote student interest in Science, Technology, Engineering and Mathematics (STEM) through robotics and LEGO competitions. This year more than 516,000 kids from over 90 countries entered, starting in local meets to hopefully move to the World Championships.

What really struck me is the competition isn’t haphazard. It isn’t what group can create a LEGO robot that can throw a ball the furthest or a robot that can just do something basic. Not at all. The teams are given a theme, this year it was water, that they have several problems that they have to build using LEGO or other robotics to solve. Moving water from a distant well to a local community, storing the water for the long term, even figuring out how to build a working water treatment system that removes waste. (Fortunately, it was just rubber balls and not the real thing.)

Walking around for 2 days I could not get over the entirety of it all. It was loud. It was exciting. I talked to kids from all over the world about their participation and what it meant. I talked to parents about how they felt learning transferred to the classroom. And I talked to the FIRST leadership about what this competition means for the future.

See, most of these teams compete on their own time. The vast majority build and study, test and refine, outside of the classroom. They are doing on Tuesday Nights at their synagogue or Thursday afternoons with their Girl Scout troop or on the weekends with a bunch of friends because they want to win.

But, what they are doing when creating their robots for competition has a direct effect on the classroom. And, I believe if we embrace the type of authentic tasks, problem solving and collaboration that I saw at the World Championships, we’d be providing students much more valuable skills. We’d be creating an environment where creativity can flourish.

Authentic Tasks-The leadership teams at FIRST and LEGO Education spend months coming up with the theme and the tasks. They want these kids to see the impact their work can have on the real world and that is at the cornerstone of all this. Next year the theme was revealed to be Space. We don’t yet know what the tasks will be (that's a closely guarded secret) but we can guess it might be about long term space travel, colonization, gathering of resources or something else entirely. Like with water this year they wanted the kids to really look at what was happening in the world. Research the problems and come up with innovative solutions. I heard a story about the teams from Puerto Rico who used their knowledge learned through their research to create basic water treatment for their local communities after they were devastated by Hurricane Maria.

I’ve written about the need for authenticity in learning before. Students crave it. They want to see what they are learning applies to their world and beyond. They want to make a difference. They need authenticity. And they shouldn’t have to look to an after school group to find it. It should all start in the classroom.

Problem Solving- If there is anything out there that is a better example of kids problem solving I haven’t seen it yet. These kids spend a year working on the theme, researching, talking to experts, prototyping, experimenting and refining to solve the problems given in the theme. They aren’t just learning that the problems exist, they are actually trying to come up with creative solutions that can have a lasting impact. I heard a story about an all-girls team last year that used what they had learned to create prothstetics in their community for kids who couldn’t afford them. They are taking what they learned and making lasting change.

Kids don’t want to come to school, listen to some boring teacher lecture for hours and answer test questions. They want to be challenged, authentically. They know there are problems that exist in the world they might just have the solution to them. Real-world, authentic problem solving shouldn’t just take place outside of the school. It should be the basis for how we teach and what they learn. Don’t give them problems that already have solutions, let them find solutions to problems we’ve yet to solve.

Collaboration- No single participants here. Everything is done as a team. These kids work together for a year or more on these themes. They have to find a way to divide tasks, communicate with each other, work together and figure out what each of their strengths are to make a winning combination. Teamwork and collaboration are at the heart of the FIRST and LEGO missions. What is even more impressive is as teams are eliminated from competition, they aren’t. Winning teams that advance to the finals choose other teams to work with them. So everyone has a chance to be a part of a winning team.

Collaboration has long been talked about in the classroom. Allowing students to work together helps them see other points of view and determine their role in the creative process when working with others. It isn’t just putting desks together and saying students are working together. It’s fostering an environment where risk taking is a part of the process, where students can share without fear and most importantly it is where all ideas are considered and celebrated.