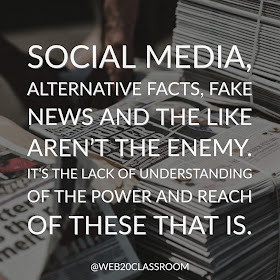 Recently most of the world has become familiar with the term “fake news.” These alternative facts are pervasive and infect all facets of our lives. From our twitter streams to talking heads on television it seems like we can not escape facts being outright fake, or the perception that they are. What’s worse is most students can’t determine whether what they see or read is real or fake.

We can’t blame those that create the facts.

We can’t blame the media that reports them.

We can’t blame social media or the tools used to access them.

We have to blame ourselves.

Social media didn’t create fake facts and the media didn’t invent fake news. Our lack of understanding of the power and reach of all of these is at the root of the problem here. Social media has long been the scapegoat for adults to blame the ills of kids and students on. Kids can’t focus because of social media. Kids stare endlessly at their devices because all they care about is their social status. Kids today won’t know how to engage and communicate because they only can talk in 140 character chunks or 7 seconds of video.

It’s clear social media has the power to engage students in ways adults do not understand. My 8 yr old daughter can watch kids her age go to the water park or visit Disney World for what seems like hours. And she can comment and engage on what seems like something so mundane and useless.

But to her it matters.

And because it matters to them, it should matter to us.

Social media must be embraced by educators and used in the classroom so we aren’t raising a society of users that doesn’t understand the power, potential and reach it has to both be a positive driving force for change and a technology that can divide and change fundamentally who we are. Moreover educators and adults must be fluent in the language of fake news and alternative facts so that our students understand and are aware of what lurks in their streams and posts.

It’s because of the engagement my daughter has with video and other kids have with other social media and most adults lack of understanding why they do what they do with social media we must redouble our efforts to be better knowers of all aspects of digital literacy. We can no longer blame the technology. Just because we don’t know how to use it doesn’t make it bad. All educators and adults need serious help in being digitally literate and identifying fake news and alternative facts.

So let’s stop blaming social media and fake news and alternative facts. Let’s instead work to better understand for ourselves how to spot what’s real and what’s not so that when students come in the classroom and we empower them to use social media to connect, they are being empowered by an adult who understands the power of social media but also helps them distinguish the real from the fake.

Protecting Your Technology Investment With @Rug_Ed 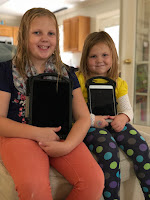 My daughters, Reaghan (8) and Chesney (4) are like your average kids. They love to play and pretend and have all sorts of fun, especially when it comes to technology. And just like your average kids they are hard on the technology they use. Reaghan has had an iPad since she was 2 years old, using it to learn letters and shapes (although these days its for YouTube, coding and Osmo). Yet she is on her third device because she, well, has a tendency to drop them. A lot.

Chesney is the same way. She has an iPad mini that goes with her everywhere so she can practice her reading or be in control of the world in Doc McStuffins. Like her sister, I've had to replace her device as well.

I've spent lots of time, money and frustration trying to find a case that will allow them to do all the things they like to do like Osmo or Sphero or LittleBits without getting in the way, while also providing me the peace of mind that my investment is finally protected.

Then the folks at Rug-Ed reached out to me to see if I would like to try one. They have a case specifically designed for K12 and the way that kids use devices. I was in the market so I thought I would give it try. In the 3 months we've been using them I have been very impressed. 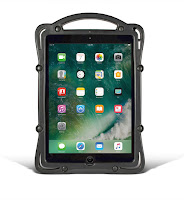 The case is made of hard plastic but flexible and designed in a way that provides cushioning around the most vulnerable areas, the corners and the sides. A built-in tempered glass screen protector disappears on top of the device while still providing maximum protection.

When I was working in schools one of the challenges we had with cases for tablets was that students often removed them because they needed to position the device in a way that the bulky case wouldn't allow. This then removed the protection we were trying to provide. The Rug-Ed case barely adds any thickness to the devices so it stays out of the way. The case also locks in around the device so it can not be removed. There is a nice carrying handle at the top and you don't notice the weigh because the case is so light. And because the case isn't bulky you wouldn't have to change your configuration in a charging cart or box. They would slide right in. 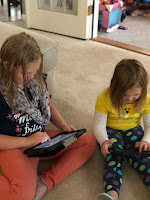 The cases are only made for iPads and iPad Minis. So there is a drawback if you use another tablet device like an Android or Surface. There is also a stand included which Reaghan said it was a little small and it caused her iPad to tip over the first few times she used it. But once she learned how to position it, she didn't have a problem again.

Overall, I am a fan of these cases. And after having my kids use them for a while I can say they have definitely been put through their paces. If you want to learn more you can visit their website, and if you want to purchase (which you should!) you can use the coupon code "web20classroom" and save 10%.