Interactive Whiteboards-Sage On The Stage? 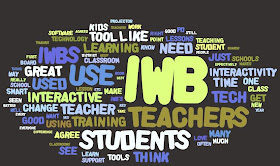 Over the past few weeks I have seen and been part of an ongoing discussion, on Twitter, on Interactive Whiteboards and their place in the classroom. It's a topic that is near and dear to my heart as I have been a trainer and advocate for use of these devices in the classroom. However, since I have had the roll of trainer and had the opportunity to visit several 100 classrooms where these devices are used I have begun to grow skeptical.

Last night on #edchat, the topic centered around the use of Interactive Whiteboards (IWBs) and if that use translates to an interactive classroom. As always, it was a very fast-paced, insightful discussion. Here is just a little of what participants had to say:
You can read the rest of the comments here and the archive here. (I really encourage you to check out the comments and the archive. There are some really great comments in both.)
Here are some of my thoughts...
When I was in the classroom my school had 3 IWBs that had never been used before I got there. I had used one in my student teaching and really enjoyed using it and teaching with it. When I discovered there were IWBs in my school that no one used I took one and set it up in my classroom. I used it everyday. I had success with kids who, when not being used, were disengaged. They would come up to the board, manipulate something and sit down. I felt like I was doing good with my kids, that my kids were really interacting with what I was teaching.
It wasn't until I stepped out of the role of the teacher and into the role of the trainer and integrator that I saw the complete opposite. I have seen teachers who, just like me, feel like they are creating interactive classrooms because one kid at a time is using the board. Or moreover, they (the teacher) is using it to facilitate a lesson. After visiting many, many classrooms like this and reflecting on my own classroom it dawned on me. While I was interacting with one kid at a time I did not have an interactive classroom. I had an interactive kid but not an interactive classroom.
I believe IWBs are viable tools for the classroom. They do get kids up and moving and manipulating. They allow some really creative content to be presented and created. However, they are still teacher-centered devices. Even when a kids or kids are using them, it is only that kid or kids who are using them. Its not everyone, which would be an interactive classroom. I would have an IWB as part of a center but not be the center of a classroom as they are in a lot of places.
Now, some would argue for the tablets or slates that connect with these IWBs.That is still one kid at a time manipulating and interacting. Some even would argue for the polling devices. Honestly, can we really say that polling is interacting? Ok so a kid might care for 5 seconds to punch in an answer but then go back to non-interaction. And how many times do we give a poll in a class?
My point is, schools and districts have sunk so much money into a device that may or may not work. But it sure does look pretty on the wall. And it sure does look awesome and sound awesome when you can say every class has an IWB. Take some of that money, time, effort and training and invest it in to devices and products that are interactive. Laptops, Netbooks, Document Cameras, Flip Video, anything that gets all kids using technology and interacting with technology, together. After all, its not about if our classrooms or schools look good. It's about whether or not we do what's best for all our kids.
Unknown at 11:47 AM